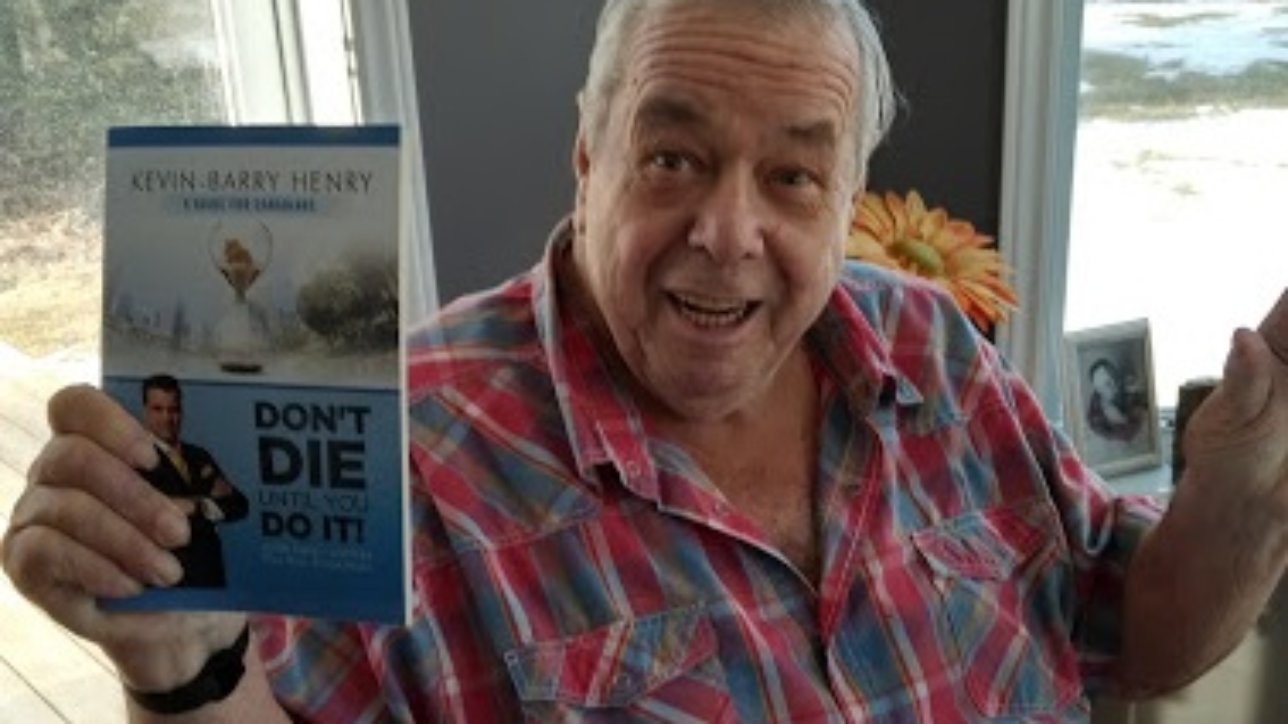 It was late one morning in the autumn of 2013 and I was at work. A call came in from my father. I asked how he was, and his answer was simple yet telling: not very good. He sounded half asleep. He is diabetic, so I had been used to hearing from him when his sugar was low or high and I assumed this was the case. “I fell” he sort of whispered matter-of-factly. I asked if he was ok, with my anxiety rising. “Well I can’t really get up”. I will be right there! I said.

The paramedics helped me get him up, and after they determined that his vitals were good, they suggested we visit a hospital to make sure nothing was broken and have the abrasions on his knees and elbows cleaned. He had been on the floor unable to get to the phone since 10pm the night before and it was now noon.

Thus began the journey that led to me writing my book. At the time of that call, my father was living alone in the only house I could call home, where he had lived and raised me and both my sisters since 1968. My father is now happy and healthy living in a wonderful retirement residence where he is extremely well-looked after. In another happy twist, my older sister Lisa and her husband have bought and now live in our childhood home.

The transition from family homestead to happy and healthy in a retirement residence was not a straight line. It was a painful, sometimes maddening, sometimes sad, but always necessary transition that my sisters, myself and of course my father took on as a family. Happily, the journey didn’t tear us apart, and we are stronger now. That transition is not always an easy process, nor one that you are naturally prepared for.

If this story sounds familiar in any way, I understand you. My sisters and my father understand you. The good news is that although you are likely entering or in the middle of a tunnel. It may be very dark in that tunnel but I am happy to report that the daylight you are moving toward at the end of the tunnel is a peaceful and wonderful place, so don’t give up, get some help and hang in there.

You see, our father had lived alone for 7 years at the time he fell and as I mentioned, he is diabetic and his mobility at that time was declining. Me and my buddy Steve had installed bars in the shower and at the toilet. We had a nurse visit twice a week and my sister Lisa and her husband were collecting and doing his laundry every week. Still, we worried. The three of us had talked about a “retirement residence” to each other and even discussed with our father with ever more increasing frequency before he fell, but it was never an urgent discussion. Dad certainly never wanted the discussion to last and he usually ended it with one of his trademark witty comments that lightened the mood in the room and made us all laugh then move to a different topic. Until he fell.

When he came home from the hospital after his fall, we all got together for the aforementioned urgent discussion that we had been putting off. This time we knew the discussion would be different and to our surprise, Dad led off the discussion saying that he knew he had to move. That was a huge relief, but also a scary thought. He had been living there 45 years! Thoughts can sometimes betray our intentions and I found myself selfishly thinking of the house and all of my memories. What was wrong with me?

As I and my family were about to find out, when you are moving a loved one into a retirement home, emotions can play a large part in the story.

We began by making a list of things our father wanted then adding a few things we all agreed would be essential. Location was also a key metric as the three of us children each live in different cities and visits from us and especially his grandchildren were going to be essential for this to work.

We made a few appointments and my Dad actually said yes to the first facility we visited (which is where he still lives today!). It was early October so we signed the lease to begin on October 15th with the idea that we could take the second half of the month to begin gently moving his things into his new home and make the new place as comfortable and attractive as possible in keeping with the situation. The target for Dad to move in was November 1st. That seemed like it would allow all of us, especially him, to get used to the idea.

November 1st arrived, and we had moved all the things he would need into his new apartment. It was a beautiful room, with floor to ceiling windows overlooking the courtyard and a balcony where he could enjoy some fresh air. My sisters did a wonderful job decorating with pictures of my Mom, and Montreal Canadians memorabilia (he is a fierce Habs fan). He wasn’t ready to move yet.

He needed a few more days. We gave him the week, as we were sympathetic to the enormity of what was being asked of him. We did go visit his new apartment and he was very happy with the place. Then we all left and our Dad went back to his house alone.

The next week came and again he wasn’t ready. The same thing the next week. It then became a different stress on our family and most especially our Dad. It was something like the discussions we had before he fell but now he was trying to convince us (and himself) that he didn’t need to move and his jokes weren’t landing. We were watching him negotiate the 5 stages of grief before our very eyes.

December 1st  now. Rent cheque cashed by the retirement residence. Dad still not ready. We are now growing impatient and discussions with our Dad are beginning to strain as he does his best to anxiously convince us that now is not a good time. Phone calls are shorter and he no longer wants to visit the apartment.

On December 13th we decide to take action. The Habs will be playing on TV at 7. That afternoon I call my Dad to see if he would like some company to watch the game. He agrees. I then call the cable company who were great as we had cancelled the move day a few times over the last month and scheduled to have his service moved that evening as long as it could be done by 7. They assured me that they could and the plan was in motion.

I arrived at my Dad’s house after work around 4:30. We talked for a while. He then tried to turn on his tv and there was no cable. He mumbled for a minute or so then as if he knew what was happening, his face went blank and he lowered his eyes, then his arms and we sat in silence for minute.

When he looked up at me he simply said: “Well let’s get this done” and just like that, he was ready.

I moved the TV and packed some clothes for the morning and we left for the 5 minute drive to the new apartment. We were only there about 10 minutes when the cable technician arrived and he took no time at all to get the TV up and running then left. At around 7 the game came on and me and my father each opened a can a beer, mentally and emotionally exhausted, but with an incredible feeling of relief.

We were finally able to get our Dad into a safe environment where we all knew he was not in danger. In the time since his move we have had many meetings with the staff and they always tell us how polite and funny he is and that they look forward to chatting with him as they help him every day.

His needs have increased as he has gotten older, but he is in the right place and the wonderful staff where he lives know it before he does so they make adjustments.

My family learned a lot about ourselves that autumn, and nobody more than our Dad. In the years that followed, we have transitioned to also helping with his finances, making his appointments and then later on, getting him to his appointments. We’ve helped him when it became clear that he would no longer be driving and would need to surrender his driver’s license. We’ve talked about wills, living wills and powers of attorney. We’ve discussed the cottage and even funeral plans (they call it final needs planning). In short, we are organized, we have a plan and paperwork ready and we all know where to find it and what to do if anything happens. It just gives everyone involved peace of mind, especially Dad.

When my Mom died, we didn’t have much to go on. She didn’t do anything wrong, she just didn’t think she was going to die when she did. None of us did. My Dad didn’t want that to happen to us again.

My Dad is happy and healthy now (as you can see in the picture) but our family have had to adjust and because of that we can tell you that if you or a loved one are faced with managing a transition in the autumn of life, it can be done. Get some help and just keep it up.

FOR A FREE E-COPY OF MY BOOK “DON’T DIE UNTIL YOU DO IT!” CLICK HERE  Download My Free Book

Don't Die Until You Do It!, Kevin-Barry Henry